Jason Carney is a renowned slam poet who recently authored the book, Starve the Vulture. The beautiful and brutally honest memoir chronicles his struggles with violence, trauma and addiction.  More importantly, it has the potential to validate and inspire those who are seeking recovery after having survived dire and discouraging circumstances.

A remarkable transition from violence and addiction to... poetry?

“The way I lived was normal. When you have the repetition and daily presence you become immune to it,” Carney told RecoveryView.com.  “You become worn down by the ordinary, not the extraordinary.”

The backdrop of Carney’s “ordinary” story features his relationship with his violent father and mentally ill mother. The turbulent happenings of his childhood eventually led to violent and hateful actions toward homosexuals as well as recreational drug use (which seamlessly transitioned into full-blown cocaine addiction).

In spite of the dire nature of Carney’s story, he learned to write instead of react about how he felt. As he made his fearless moral inventory, it became clear to him that he could define and redefine himself through the writing process.

While this realization sparked his journey toward recovery, he quickly found that there could be “one moment of spiritual clarity when the universe hiccups, but that’s fleeting and you have to follow up with action.” Like many who follow the Big Book, Carney emphasized that his recovery was about succession of many ordinary moments and days placed together.  He managed to continue and grow and build as the days added up and used poetry as a tool.

The arts have found their way into therapeutic environments and can be a source of comfort, inspiration and healing for many.  While some argue that poetry is a dying art form, Carney takes the position that the hip hop and rap generation is proof that poetry is evolving into something that is accessible to a larger population.

“European tradition has made poetry for the upper class and highly literate.  But hip hop is allowing people to find everyday poetry in everyday language,” said Carney. He also pointed out that the evolution of poetry combines the oral and written traditions and is, as a result, highly prevalent and accessible.

Carney describes a multi-layered revolution that took place within his recovery experience, telling RecoveryView.com that poetry changed his life and expanded his knowledge of the world. He went on to describe how the very same revolution is occurring in society, advancing the notion that poetry is a method of protest “of the people, for the people and by the people.”  Carney further explained that poetry is powerful when put in action for civic engagement, because it places the artist in civic duty and allows a poetic revolution to unfold.

When asked why the idea of revolution is so important, Carney responded: “We live in a society where people are routine to death.  It breeds complacency and stagnancy.” He insisted that when people just do what seems to work for them, they are focused more on survival than on “living,” which eventually traps them into unhealthy norms - norms like hateful thinking or dangerous addictions.

As the Artistic Director for young DFW Writers, Carney works with students from six high schools. He helps them to understand their definition of self and their community through civic engagements. As part of this endeavor, his organization is partnering with the North Texas food bank.

While Carney is focused on teaching, cultivating spaces for young artists, and encouraging civic engagements, he will soon be performing a series of shows at slam venues in the Northeast where he first started his career as a poet. 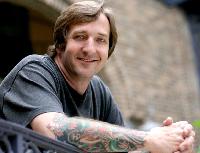