My name is Paul and I am making a documentary film about the joy of recovery.  I am five months into this project and I have driven from Washington State to work in California, New Mexico, Colorado and all the states in between.  My semi reliable Jeep has required major repairs twice but the interviews I have filmed and the spiritual insights I have gained are priceless.

I have just been in San Diego to the 30th Stand Down.  If you have never heard of it or seen one of these it is hard to compare it with anything else.  Less crowded, hot, and self directed than Burning Man, more soulful and intimate than a Love In or a concert but with an emotional overlay and a sense of the tribal like a pow wow.   The Marines put up tents on the baseball fields near Balboa Park and 900 homeless vets showed up to be a part of this.  Like the rock concerts I used to work at, people were camping out at the gates.  Some of them were there for days.  They had their shopping carts, their animals and all their worldly possessions.

The draw to this event is the sense of belonging.  Once upon a time all these people were young and eager to serve their country and now, due to the trauma and losses in their life, they are in extreme need.  Who would pick this life?  But they are ex-military so all of them have been trained to survive.  Stand Down offers them a door way back to a life of meaning and purpose but meets their needs where they are.  There are medical, dental, optical, legal assistance to clear up their trespassing and public intoxication citations.  There is a free clothing store.  The local junior college provides cosmetologists to give them facials and hair-cuts.  There are showers on the premises, and three meals a day provided.

All this is a big production and it is meant to lift them out of the crushing loneliness that is addiction.  I have heard it repeated many times on this journey of discovery that the opposite of addiction is community.  Marilynn Cornell, the godmother of this event, runs the Veterans Village of San Diego.  Ms. Cornell has set up an environment for these men and women where the answer to every request is YES.  I met many success stories during my weekend with these wounded warriors and saw people hug and cry in her arms, grateful for the life that they recovered.  This event is very spiritual because those people who live on the margins know something about ego death, humility, and pain that makes them ready to experience the joy of something bigger than themselves.

This event is dependent on an army of volunteers starting with the Marines who put in the toilets, showers, tents, and cots.  There are legions of groups who buy and prepare the food, and there are those that volunteer to be tent leaders.  Many of these volunteers were former participants, having lived on the streets for years before they transitioned into drug treatment programs, stable housing and employment.  The problem with this demographic group is many of them are combat vets who have been taught to stuff their feelings and ignore their own trauma.  PTSD runs rampant among this group and rather than unload they get loaded.

I met Eddie who was a Marine that had several combat deployments.  On the outside, the world might judge him as one of those people.  When Eddie finally let go he went through treatment at the Veterans Village and realized that he was not a loser and had a lot to give.  He went to junior college got his AA degree in alcohol and drug counseling.  He got a job , earned a BS in psychology and went on to get a master’s degree.  Eddie now works with vets at the VA Hospital in San Diego.  Just one of hundreds of examples of transformation.  People who were hopeless and had no purpose found a way to transcend their pain by finding a way to open their hearts and breakdown the wall that they built up every day though drugs.  It all comes from trying to not feel but the more the feelings come back the more people want to use.

I met many people who were on the verge of suicide but went to Stand Down with the impossible hope that going there would provide a risk-free trial at sobriety.  Two vets who worked on security were ready to take themselves out, but now they have found their life\'s purpose through being there for others.  Who knew that the best way to find sobriety and purpose would be to acknowledge the wound and make friends with it.  When I was at the Home Boys project several months back Fr. Greg Boyle had quoted a poem by Thich Nhat Hanh about making friends with your woundedness, because if you don\'t you are going to despise the wounded and feel superior to them.  Fr. Boyle also said that it is the soul that is ventilated with tenderness that is ready to change the world.   I have seen that here.

During the Stand Down I had the privilege of meeting many chaplains, two Imams and a Rabbi. The premise of my documentary, “Called From Darkness,” is to discover if addiction has a spiritual component.  With every interview and conversation I find out how addiction is a soul sickness or soul sucking affliction.  The Rabbi told me that so much of addiction is taking a narrow view when we see everything around us including God as part of our story.  That allows individuals to separate themselves and feel apart, more important, or superior to others.  The Rabbi said that the better way to see it is we, all of us, are part of God\'s story and that we are playing our part in it. God does not have just one plan.  Based on circumstances which constantly change we all have many spiritual encounters and options each day.  If we can pay attention to them it will liberate us from only fulfilling selfish needs and running away from feelings.  Sharing and expressing feelings are critical to our well being.  I think I find this to be true and I keep repeating what I heard from Richard Rohr on the first day of production as he said, “Negative emotional energy that is not transformed will be transferred.”

At this point of producing this film I have transcribed hours of interviews and relived moments of truth and tears.  I have been to the Imperial County Jail to witness their program where inmates take college credit for classes in AOD and counseling, we have been to a faith based treatment center where I interviewed Rev. Jens Christy who at 86 is still working a recovery ministry.  We have been to Home Boys Industries in east L.A. to film with Fr. Greg Boyle and his chief AOD counselor, Fabian Debora, who is an accomplished fine arts painter who shared his deliverance from gangs and drugs to a community of joy and transcendence.  Outside of Olympia Washington we went to the Northwest Indian Treatment Center we observed how ceremony and ritual purification was able to reattach people to their true feelings.  One counselor told me that when some of the clients heard the music they cried and they thought that there was something wrong with them.  This they were reassured was not a sign of madness but a sign that they had found their way back to feeling and belonging that was greater than themselves.

The last part of this journey was two days at Recovery Cafe, which is a place of belonging.  The clients are called members and are held accountable.  No drinking, smoking or using on the premises.  Lunch and camaraderie are provided.  The members and the volunteers love the experience because community is the opposite of addiction and listening is a great gift.  The Killian Noe, the director of Recovery Cafe reminded me of something that St. Teresa of Calcutta said, “The reason that we have no peace is that we have forgotten that we belong to each other.”

All this sage advice and the loving action I have witnessed on this journey of discovery has brought me spiritual insights that will last me for the rest of my life.  Both Fr. Boyle and Killian Noe echoed the same idea, that the people at the margins understand something that most people don\'t.  They can teach us about openness and spirituality and we all need to spend time with them because they know something about joy, humility, and simplicity that is essential to for all of us to know.  I now realize that the mission of producing this film is not only to reduce the hopelessness that people feel when a family member falls into addiction, but that we all need to uncover the joy that can be found by being open, honest, and grateful, and share it abundantly. 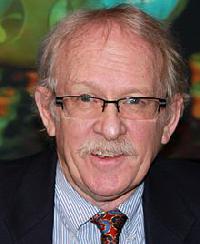 The idea to produce a documentary about addiction as a spiritual disease came from a chance meeting...

Four years ago I started to produce a feature documentary inspired by a meeting with Sheila Raye...

You are invited to view the documentary made with Fr. Greg Boyle and HomeBoy. HomeBoy is the...